When I came across the image of a  burger stuffed between Ramen Noodles in lieu of a bun, I knew I could successfully use Spaghetti to make buns Italian style, instead.  Spaghetti Bun Burgers. With hundreds of people standing in line at Brooklyn’s Smorgasburg, only on Saturdays at East River State Park, on the Williamsburg waterfront, my curiosity was well challenged. I just had to find a way to satisfy it.

And I had to do it in my own kitchen since unlike the Cronut, no place in London is already selling the new fancy delicacy from New York.

People start lining up at 7:30 a.m. on “for a chance to get just one ramen burger, which Shimamoto, who is of Japanese descent and grew up in Los Angeles, says is made with fresh ramen from Sun Noodle in New Jersey”.

An urban story that resembles well the launch of the most popular food craze of the moment, the Cronut. It’s again fusion food that catches the attention of New Yorkers, and again the intersection of two different culinary cultures. With a Cronut, French all butter croissants meet what is probably the America’s favorite sweet indulgence,  Mr. Donut. In a Ramen burger, Japanese noodle marries Mr. Hamburger,  the great invention of Louis Lassen, a danish immigrant in America in 1900.

In my kitchen, veggie patties made of layers of Portobello mushrooms, tomato and mozzarella are stuffed between chewy and compact Spaghetti Buns. Same concept, Italian flavors and, above all, no queues involved. Would you ever replace soft bread loaf with this spaghetti-based bun? Are you ready to say bye to Bread?

p.s. While I write this post I find out that at Philadelphia’s PYT someone recently came up with the same idea. I already have a competitor :). 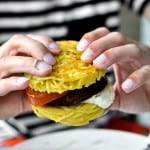